What we can learn from Kris Kringle about competition 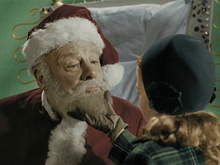 A client of mine, a top notch property manager (and, no, that’s not an oxymoron) who manages nearly a 1,000-doors wrote to me saying, “Some realtors who have helped their clients buy investment properties are reluctant to refer them to us even though we are probably the best property managers in our area. Why? Because our leasing/renting folks are licensed real estate salespeople or brokers and they think we will steal their clients. What can we do about that, Prof Bruce?”

I wrote back this way:

Holy smokes, Bill (not his real name), I did not know this. I never think like this. Why? Because cooperating with other brokerages is the key to everyone’s prosperity.

Here’s the thing: Always do what’s right for your clients (like getting a professional to manage an investment property properly) and you’ll always have clients.

Another way of saying this: Always put your clients’ interests first, and you’ll always have clients. I suspect this will harm the non-referrers more than it will harm you.

Do you remember the Xmas movie, Miracle on 34th Street? Do you recall what got Kris Kringle in trouble the first time? It was this: Ignoring instructions to steer parents to buy from Macy’s (where he worked “playing” Santa), Kris directed one shopper (Thelma Ritter) to a competitor, Gimbels instead.

This was heresy at the time. Same thing with these dunderheads telling folks to steer clear of your company.

But that of course is not the end of Kris’ story…

Later in the film, that client who was told she could find what she wanted at their competitor’s store was so impressed, she tells Julian Shellhammer (Philip Tonge), head of the toy department, that she will become a loyal Macy’s customer.

Then Kris gets to keep his job, and it became standard policy… back in 1947.

Guess folks in Ottawa never read the memo in the 72-years that have passed since.

When I was a land developer, it took me nearly 20-years (!) to convince the industry to accept three or four homebuilders in each new subdivision I built instead of just one.

They all hated and feared (incorrectly) competition.

Why do you see three or four petrol stations or coffee shops in one small area? It’s because marketing by one helps everyone.

In the home selling biz, here’s how it works:

Whilst Richcraft, a competitor, is selling brick homes.

Someone (ie, Prof Bruce) somehow convinces them to co-locate their sales centers across the street from each other in a subdivision Bruce has created—he and his company put in roads, services, animations and sells them lots. They in turn sell those lots with new homes on them to the public.

Now both Cardel and Richcraft spend X$ on marketing. They each bring 30 people to their sales centers a week.

Here’s what happens next:

But, of the 24 Cardel fails, 12 of them walk across the street having decided they like brick homes better and Richcraft makes another 3 sales

And, of the 24 Richcraft fails, 12 of them walk across the street having decided they like stucco homes better and Cardel makes another 3 sales

So, in this scenario, 2X$ of marketing yields total sales by both builders of 18 homes.

But if they were alone, neither would have had any benefit from cross-marketing/cross-pollination (ie, the fails simply walk away sans new homes) so the 2X$ marketing spend would (at least in the short term, and remember what Nobel Prize winner, economist John Maynard Keynes said, “In the long run we are all dead,” which was his way of saying fix the problems you have today, today, and let the future worry about itself) result in just 12 sales, one third less.

In Ottawa, many commercial brokers don’t belong to OREB (Ottawa Real Estate Board). They say it’s because they don’t like OREB fees and they don’t need the MLS system to provide info to their clients. I suspect after years of experience that the main reason is they are trying to double-end each transaction (that is, make both sides of every deal).

Again, I believe it’s a mistake. What would you rather have:

Not only will your commission income be higher IMHO in case 2, but your clients will be more satisfied with the level of service you’ve provided plus you will have many more clients.

Remember, in case 2, you only represent one side–either buyer or seller. You are never in multiple representation, never in a conflict of interest. Your duties are crystal clear.

California does not allow realtors to be in multiple rep. I believe Ontario should follow California’s example, but I have to say that I am probably in a minority of one (out of about 60,000 realtors in Ontario) on this score.

I’ve tried for more than decade to get Ottawa commercial brokerages to join the Board and share their info, but so far, I am batting .000. Real estate is a very conservative business I am afraid.

And construction is even worse. If the tech industry was like the real estate sector, every time you get in your car with your smartphone, you would have to have three semitrailers full of knobs and vacuum tubes follow you around to make the thing work.

Last comment–if your lawyer in a trial that carried a life sentence if you are convicted was in multiple rep (ie, representing you and the crown or state), how would you feel about your chances of acquittal?

I lied, here’s my final pontification: There are many hidden factors like this that severely impact economic growth and development. I am working with the city of Ottawa as special economic adviser re their new official plan due out in 2021. They are trying to create an “official plan for the 21st century,” one that will serve as a platform for creative people to build-out interesting real estate concepts and develop optimal careers and PB4Ls (personal businesses for life) so they can provide for themselves and their families.

Think that an OP (official plan) isn’t that important in this regard? Read this from an article I wrote for OBJ, https://obj.ca/article/op-ed-zoning-better-ottawa:

In their groundbreaking study, University of Chicago economist Chang-Tai Hsieh and University of California at Berkeley professor Enrico Morerri argued that zoning restraints on new housing have prevented people, especially younger workers, from moving to or staying in clusters of innovation. They concluded that such constraints lowered aggregate U.S. growth by 36 per cent between 1964 and 2009.

Think of it this way: if zoning codes had been as open and permissive in 2009 as they were in 1964, the U.S. economy would have been one-third bigger. That’s an enormous increase in economic well-being amounting to nearly $7 trillion per year in additional gross domestic – or an extra US$21,432 per year per person, based on 2017 population estimates.

In the words of Harvard economist Edward Glaeser: “Arguably, land use controls have a more widespread impact on the lives of ordinary Americans than any other regulation. These controls, typically imposed by localities, make housing more expensive and restrict the growth of America’s most successful metropolitan areas.”

I can think of a few things at the national level too that would immensely help Canada:

-a sea to sea to sea transportation, communication and energy corridor with incontestable rights-of way

And a bunch more 😊 Stay tuned.

• MAKING IMPOSSIBLE POSSIBLE
• FREEDOM VIA REAL ESTATE INVESTMENT AND PB4L, PERSONAL BUSINESS FOR LIFE
• FEHAJ, FOR EVERY HOME A JOB
• MAKE YOUR HOME WORK FOR YOU, INSTEAD OF YOU WORKING FOR IT
• HIGHER ROI NOT JUST FOR OWNERS AND INVESTORS, BUT FOR TENANTS, GUESTS, VISITORS, NEIGHBORHOODS, COMMUNITIES, TOWNS, VILLAGES, CITIES AND THE ENVIRONMENT TOO

Previous Post What’s the difference between a “project” and a business model? Next Post What are the best (legal) businesses to be in?