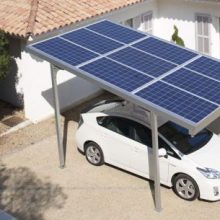 1. it has a 0-step entryway (either at the side of the house or front);

2. wider doorways and corridors on the main floor;

3. a main floor bath or powder room and at least one main floor accessible bedroom.

Lately, especially as I get older, I wonder if a 4th element should be added, at least in northern shelf cities that get a lot of snow. That would be carports and walkway covers.

Part of the rationale behind the visitable home movement is to make homes and apartments more accessible for elders and persons with challenges. But the other reason has got to be to allow elders and others to stay in their homes and in their existing communities longer. Who really wants to leave their home and neighborhood to live in a vertical (multi-story) structure, which is just an expensive warehouse where seniors go to await death? No thanks.

Apart from being costly, most seniors are trading ground-oriented homes with significant outdoor activity space (known as backyards, front yards, porches, decks and balconies) for tiny rooms, which can’t even compare in size or capabilities with modern college dorms.

Don’t believe me? Go tour a new residence on a campus near you; it’ll have incomparably better food, shopping, exercise, Internet, cable, wi-fi and common rooms than almost every seniors residence on the planet where they expect elders to sit outside their puncy drab enclaves all day

until someone puts them to bed instead of online, gabbing away with friends, fans and followers as well as sons, daughters, grandsons and granddaughters via skype, google hangout, instagram, facebook, snapchat and twitter, while answering email from their online stores built on etsy, ebay or pinterest platforms.

Holy age discrimination, batman. My mother-in-law is 91 and still runs our family. So there.

In many cities, temporary structures like car tents are banned, either because they are considered visual blight or because they might collapse under load if not brushed off after a major snowfall or ice storm or because they could blow away in a windstorm unless anchored properly, which brings me to a solution.

Why not allow semi-permanent, properly engineered carports and walkways to cover every single linear meter of walkway and driveway on a property? These could be attractive architectural elements like the ones I show below, which can also be easily unbolted if necessary to, say, allow repaving of a driveway. Obviously, these would need to be upgraded structurally for tough northern weather, a trivial design job for any civil engineer (guilty).

I think it would
also be more environmentally sustainable. Last year, we had a snow removal
contract for our Ottawa
home that paid them $600 to do two driveways (via tractor-mounted snowblower) and all the walkways (by hand) for
the season.

They showed up about half the time—the rest of the year we
either had to call them and coerce them to return after they’d accidentally
missed us (contractors are often out for 40 hours straight moving snow so they’re tired, cranky and prone to error) or I would literally run down the street
at 4 am chasing the plow, hollering and signaling to them to turn around and
come back to our place.

I am guessing
that permanent, attractive walkway covers and driveway carports would be both economic and environmental winners.

If you want an
8% cap rate on your real property, it’s easy to figure out the maximum you can
spend installing a carport and walkway cover. Here’s how to do that:

If you divide
the $600 annually we paid for snow removal at our home last year by 8%, you get a maximum
you should budget for your carport/walkway cover of $7,500.

You can buy a
carport kit like the ones I show above and below from Home Depot or Lowe’s for about
$2,200, but you still need to put it together and install it. So $7,500 gets
you quite a bit of cover, cuts down on shoveling, reduces the amount of CO(2)
emitted as plow operators race around trying to clear snow and looks decent
too.

Lastly, I learned from Paul Cairns, a young person I coach in real estate and an engineer working with Natural Resources Canada in the sustainability field, that carports and walkways are now being twinned with solar panels, making them doubly green…