The cat came back 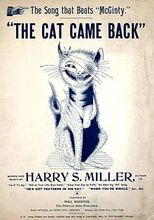 This Xmas I am into handmade Christmas gifts as opposed to store-bought ones.

So, here’s a story I wrote and recorded then uploaded to YouTube for my two grandsons. It’s called Sammy Came Back.

It’s set in a town called Wretched and it’s about a cat locked out by a forgetful husband in subzero weather who ends up in a scary place called SKULL VALLEY. A man by the name of Mr S Claus plays a role too. It’s based on a true story.

Hope you enjoy this story and video by moi…

Grandmama loves Sammy so much that her number 1 grandson, Godric, teases her saying, “Grandmama has a new boyfriend!”

They all live in a town called… Wretched. It’s “wretched” because folks there all seem to work for the govern-mint and it’s where everyone else has to pay their taxes to…

Anyway, it’s Christmas Eve and Santa is supposed to be having a ball

But Goody and Ricky volunteer to look for Sammy; “No worries, Grandmama, we can find him–We’ll just follow his pawprints in the snow!”

Now Pops is thinking, “This is a bummer. Our anniversary is ruined! Grandmama will never forgive me! Oh, Sammy… WISH YOU WERE HERE!”

After the boys get warm, they head outside again; this time they know they’ll have to descend into SKULL VALLEY, cuz that’s where Sammy’s tracks are…

Do they tell Grandmama where they are going? NO YES

They track Sammy til they come to a nearly impassable culvert, one with a super cold stream rushing through it…

“You’re too little, Ricky. You’ll lose your footing and drown. Wait here,” says Goody “No way, José,” Ricky replies So, the boys (with Goody holding Ricky’s hand) enter to culvert, which represents the boundary between SKULL VALLEY and the town of Wretched

They call and shout… “Sammy!” yells Goody “Ammy, where are youuuu?” asks Ricky

Harper is there… in fact, by now the whole neighborhood knows that Sammy is missing and, with the sun going down, he’ll be a dead duck by morning if he’s not already lying somewhere frozen like an icicle

So, the boys and Harper decide to put up posters around their neighborhood saying… WANTED: ONE CAT ESCAPED FROM OUR HOUSE TODAY… ANSWERS (SOMETIMES) TO THE NAME, “SAMMY!” CALL US IF YOU SEE HIM, PRETTY, PRETTY PLEASE. [Harper added the “Pretty, Pretty Please” to their message to which Ricky said, “Ugh.”]

What happened to Sammy in Skull Valley? How come there are so many skulls in that valley? Is Sammy dead? #Gulp

A killer is loose in SKULL VALLEY… his name is Wolverine

The wolverine is sometimes referred to as the Glutton Do you know what “Glutton” means? Anywho, a wolverine is a stocky and muscular carnivore (meat eater); it’s a solitary animal with a reputation for ferocity and strength out of proportion to its size, with a documented ability to kill prey many times larger than itself… which means it can certainly eat Sammy and maybe the boys too! #Eek

What has Sammy been doing all this time? Well, he’s been fishing instead of mousing! Where did he learn to fish do you think? Do you think Grandmama was happy when she came home one day last month to find her fish tank empty? Stay tuned…

Where did Sammy go when he got cold? Well, Sammy has helped Goody and Ricky build a Quinzhee like this one… so he knows if he can get out of the wind by finding some fallen-down bush, he can create a small space in which he can warm it up with just his own body temp Say, “Ahh”

Someone or something is trying to break into his all-season winter cottage… who could it be?

Sammy’s fir stands straight up—this is to make him look bigger than he is Sammy starts yowling at his visitor—this is to scare the intruder away (hopefully) But Wolverine isn’t afraid of kitty kats meowing or having a big hair day No indeedy, Wolverine can smell a good, high caloric dinner… “Yum,” thinks Wolverine, “I hear cats taste like chicken!” Meanwhile, Sammy is thinking, “Eat a few frogs! I hear they taste like chicken!”

Easy pickings here, thinks Wolverine, I’ll move in to his all-season cottage afterwards too… “He.He.He.He.,” he laughs out loud

Sammy is fighting tooth ‘n nail (actually tooth and ‘n claws) for his life… the yowls from Sammy and the growls from Wolverine are ferocious and LOUD! If Wolverine gets in here, I am going to lose all my 9-lives in one fell swoop, thinks Sammy #Gulp He’s also thinking of what his buddy, Grappler, looked like after a fight with a local pooch… #Eek

But at the last moment, when Sammy is exhausted and all appears lost, Santa and his trusty reindeer appear… Rudolph neatly lands a powerful kick (using his hind legs) on Wolverine, who flies through the air landing more than 10-meters away; after which, he runs off yelping from a bad bruise to his ribs… Ha. Ha.

Then Santa asks, “Yo, Sammy, need a lift?” to which the cat answers, “You bet, Santy Claus!”