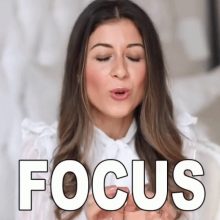 Why I am a real estate investment and business coach, Bruce M Firestone, B Eng (civil), M Eng-Sci, PhD

Why I am a life coach, Dawn Marie MacMillan Firestone, CPCC, ACC

Here’s what former Edmonton Oilers GM Glen Sather (who built their Stanley Cup-winning dynasty in the 1980s) had to say about deal-making:

“The best trades you’ll ever make are the ones you don’t.”

What Glen is referring to is the summer he spent resisting calls by local sports media and fans to trade some or all of his superstar players (Wayne Gretzky, Grant Fuhr, Mark Messier, Jari Kurri, Glenn Anderson, Paul Coffey…) after they lost in the first round of the playoffs to their hated rivals from Calgary (the Flames) despite winning the President’s trophy as the NHL’s best regular season team. He made the fewest ever changes that off-season.

The next year what happened? They went 16 and 2 in the playoffs winning the first of what would eventually be five, count ‘em five(!) Stanley Cups.

I would rephrase it this way: “The best deals you’ll ever do are the ones you don’t.”

Because, as a coach, I don’t want you to spend 3 or 4 and certainly not 10, 20 years of your life pursuing things that simply aren’t going to work.

So, one thing your coach can help you with is assisting you in terms of finding your true-life purpose and then making sure you surround it with a workable business model so the
harder you work, the more money you’ll make.

You’d be surprised at how many folks have businesses that don’t work, they do… 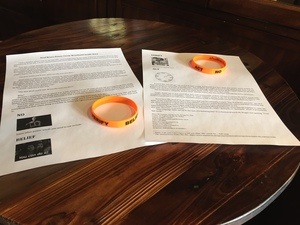 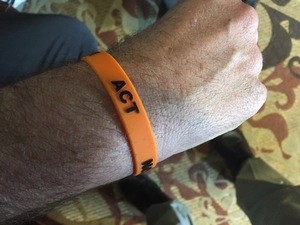 Anyway, after you have a workable business model, you’ll need to FOCUS on it for a very long time, and treat everything else that comes along as a hobby or, better yet, I give you permission to use a magic little word. That word is:

Some other power words you need to use include:

And here’s another one I use a lot:

If you’d like, you can get one of Prof Bruce’s orange wristbands that have these four power words written on them (in black) so every time someone says, “Hey, Stephan, you ought to invest in this great penny stock I’ve just gotten a tip about—it trades on the Vancouver stock exchange under the symbol BS-PG, which stands for BS-Petro Gold[1],” you can look at your wrist, tap a few times on the word, “NO,” then say it aloud.

The wristband is called the “power circle” and the reason why you say it out loud and tap on it is as follows: People should tap on each word when they need reinforcement of these concepts. It retrains the ancient primal brain (sometimes referred to as humanity’s “reptile” or “lizard” brain) to refocus, to say “no” to bad ideas, to have confidence and belief in yourself and to act with clarity and deliberateness as well as identify people you can trust and those you can’t…[2]

If you have, like most of us, an inner voice that says (occasionally, I hope), “Hey, Prof Bruce, you suck,” tap a few times on the word BELIEVE to silence that saboteur. REMEMBER, IF YOU DON’T BELIEVE IN YOURSELF NO ONE ELSE WILL EITHER.

If you are unsure about someone, seek to test them somehow and use other sources to VERIFY their bonafides so you’ll know if you can trust them or not.

As president Ronald Reagan said to Russian president Mikhail Gorbachev when they got together to ratify the Intermediate-Range Nuclear Forces Treaty on December 8th, 1987: “Доверяй, но проверяй,” which is pronounced this way, Doveryai, no proveryai.

Your language skills not up to the task of translating this? It’s a Russian proverb Mr Reagan was quoting, “Trust but verify.”

Through my coaching practice, I can fundamentally change people’s lives for the better.

How do I know that?

Because I see it every week, every month in the hundreds of people I’ve coached… they have greater confidence that they’re on the right track, that they’ll make more money, that they’ll have more control over their own destiny, and that they are doing what they are passionate about but within an organized, focused and accountable structure.

My partner, Dawn Marie MacMillan Firestone, is a California-based ICF-trained life coach; she also has a wristband[1] (hers is blue with yellow printing) for clients. 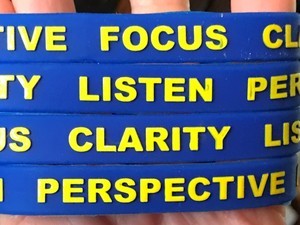 Her four power words are:

Oh, and one more thing.

She insists I carry around a piece of paper, in case I ever think about buying another NHL team, on which is written three times:

For me, the only things that have worked are real estate investing and my PB4L. 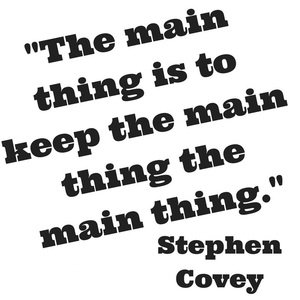 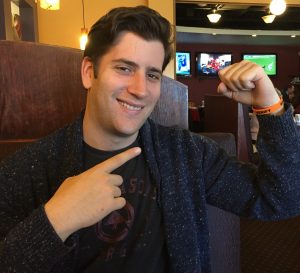 Coach Dawn describes the power behind her inner circle wristband:

It is not unusual for people to forget things; the wrist bands are a combination of two very powerful techniques to stimulate recall – tying a string around your finger and meridian tapping.

A long time ago, people used to tie pieces of cloth around any painful part of their body to keep the “spirit of life” in that area, and to keep the pain from spreading to other parts of the body. A carry over from that technique led to tying a piece of string around the index finger to keep a memory there. The string on the finger was a reminder that something should be remembered later when it was needed.

To tie a string around your finger is a way to make sure you remember something when you don’t have a way to write it down at the time. If you tie the string at the very moment you are trying to memorize something you wouldn’t forget it later because the string associates that brain activity with the memory you want to recall.

Tapping therapy is based on the combined principles of ancient Chinese acupressure and modern psychology. Tapping with the fingertips on specific meridian endpoints of the body, while focusing on negative emotions or physical sensations, helps to calm the nervous system, rewire the brain to respond in healthier ways, and restore the body’s balance of energy

Tapping makes full use of the mind-body connection, acknowledging and integrating the concepts that physical pain, disease, and mental wellbeing are intricately connected to our emotional states.

The basic Tapping technique requires you to focus on the negative emotion at hand – a fear, a worry, a bad memory, an unresolved problem, or anything that’s bothering you. While maintaining your mental focus on this issue, you use your fingertips to tap 5-7 times on each of the 9 specific meridian points of the body.

Tapping on these meridian points in sequence while concentrating on the negative emotions engages both the brain’s limbic system and the body’s energy system, encouraging a sense of safety and resolution. And as the scientific field of epigenetics is proving when you change your internal environment – your emotions and beliefs – external changes in your mental & physical health will follow.

Tapping on the word to remind you of what is need in the moment gives you the power over yourself and puts control over your destiny back into your own hands.

The words on the bands have been carefully chosen: Focus, Listen, Clarity and Perspective, to concentrate your attention. The colours have significant powerful meaning

Together the colours and the words set the intention and co-create the foundation of a coaching conversation.

Postscript: One of my power circle bracelets (which, remember, my daughters call, “Brucelets”) made it to Antarctica aboard l’Austral thanks to Paul Hession (right) w/ spouse & captain Christophe Colaris, https://brucemfirestone.com/power-circle-and-inner-circle/.