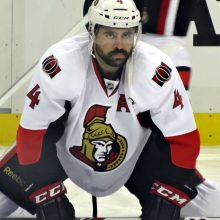 What’s in a name? Well, if you are Ottawa Senators defenceman Chris Phillips and the other four founding partners of Big Rig restaurant and brewery, a lot.

Mr. Phillips and his partners – Angelis Koutsos, Lon Ladell, Pierre Cleroux and Jimmy Zourntos – spent $5 million to launch the business in a west-end Ottawa mall about two years ago. Right off the bat, they knew they had a strong name and brand.

“Big Rig,” after all, is Mr. Phillips’s nickname. It brought instant recognition to the business, as well as certain expectations.

“My name is above the door, so it’s tied to my image in the community and vice versa,” says Mr. Phillips, the team’s longest-serving player. “It’s not just a business or a job. Staff are representing not just themselves but me, and together we are building a lasting brand.”

Big Rig was financed with 50 per cent equity and a loan from TD Bank. Its revenues were about $6 million in its first year, Mr. Koutsos says, and are north of $5 million this year.

In a city like Ottawa, those are big numbers. Part of their revenues come from licensees – other restaurants that sell Big Rig beers – as well as sales in LCBO outlets across Ontario.

“LCBO has been stocking Big Rig Gold for about a year now,” Mr. Ladell, the company’s brewmaster, says proudly.

Mr. Ladell worked for Spinnakers Brewery in Victoria, B.C., a pioneering microbrewery that opened in 1986. He eventually moved to Ottawa because his wife’s family is here, and it was his availability that made Big Rig possible.

Originally, Mr. Phillips and his partners considered opening a Brazilian steakhouse downtown. Fortunately for beer lovers, that deal fell through, and two days after that Mr. Ladell appeared on the scene.

“Lon fell in our lap and we went from there,” Mr. Koutsos says.

So far, the suds business has been a roaring success. Big Rig’s brews took home nine medals at the Ontario Craft Brewing Awards, the most of any microbrewery. The brewery also captured a gold medal at the Canadian Brewing Awards and the Ontario Brewing Awards’ 2013 award for best new brewery.

One of the business’s biggest problems so far has been handling the volume of people coming through the door. Big Rig welcomed 2,300 customers in its first three days of operation alone.

“I got my hand slapped,” Mr. Phillips says. “I was inviting members of the media to come to the pub for a tour, doing interviews in the building and in studio and Angelis (who has restaurant operations experience) asked me to STOP.”

The other challenge is brewing enough beer to meet not only their own demand but also the needs of their licensees and the LCBO.

Big Rig recently leased 16,000 square feet of warehouse space in the Kanata North Business Park, where the partners plan to brew beer, launch a tall can, do taste tours, sell merchandise along with the beer, and, if they can successfully navigate Ottawa’s byzantine zoning rules, host events and serve food. Increased production is also required because they are opening a second restaurant in the Gloucester Centre, where they’ve just signed a lease.

Big Rig currently employs 70 people at its west-end restaurant and will likely add a similar number at the new location. The brewery employs another eight people, a number that could grow, depending on what city planners allow the owners to do in their new warehouse location.

“Some restaurants – a few – have told us that they won’t take our licensed products because we compete with them with our location,” Mr. Koutsos says. “But I can’t see how one west-end location can have any impact on a pub downtown except a positive one. We are extending an opportunity to bring some of the Chris Phillips and Lon Ladell magic into their own stores. What can be wrong with that?”

Asked if they have five-year goals and a concrete business plan, they answer that each of the five partners is consulted on everything, but they mostly stick to their own specialties – operations, brewing, marketing and finance. They are proceeding based on their experience and pushed by demand – which, it could be argued, is better than following a 30-page document full of unsubstantiated assumptions, tables, spreadsheets and graphs.

It also doesn’t hurt that they have the ongoing endorsement of one of the city’s most respected professional athletes, who clearly understands how important Big Rig could be to his post-hockey plans.

Asked if he would like to play his entire NHL career with Ottawa, Mr. Phillips, who just signed a new two-year contract with the Senators, says with a smile, “That’d be pretty cool.”

Clearly, good things are brewing for him and the business that bears his name.

Previous Post Just how crazy are entrepreneurs? Ask Queen Isabella Next Post Is there an alternative to going broke after your pro sports career is over?