Most powerful sales tool ever discovered 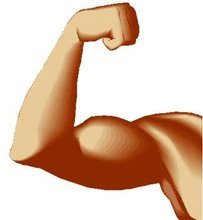 Here’s a sketch I drew yesterday for a young client of mine—Jordan Sweeney—who is wondering how he is going to cope with all the demands on his time including running the STA (Sports Training Academy’s) multiple social media channels.

I told him to leverage his time by recruiting a network of contributors. It’s something I do often for just about anything including: increasing sales, finding more sponsors, finding talent, building market share, getting more people posting to my social media accounts, selling more tickets, finding more clients/customers, etc it’s the most powerful sales tool I know. Online, it’s called affiliate marketing, but it works just as well in RL, real life. 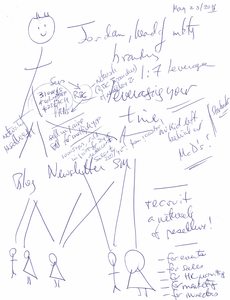 or trying to recruit more investors for your biz

or more talent to join your organization

or sell more tickets to an event you are hosting

or sell more product and services

or find more clients and customers

What if you recruited (both inside and outside your company) a network of people and companies who would refer potential recruits, sponsors, investors, clients, customers, bloggers, ticket buyers and so forth?

In my experience, many people (and even companies) will do that without any compensation at all because: a) it makes them feel good (sort of like CSR—corporate social responsibility) or b) it drives more business their way.

Here’s an example—when we were trying to land an NHL franchise for Ottawa, we wanted to sell 15,000 PRNs (priority registration numbers), which, for $25 each, got you in line for a season ticket when and if we got a team. They also got a nice certificate and a bumper sticker saying BRING BACK THE SENATORS.

Now, no one buys just one season ticket, so we sold them in pairs. That reduced the number of sales we had to do from 15,000 to 7,500. Then we recruited 31 of our staffers and some outside volunteers to sell PRNs PLUS we got one of our sponsors, RBC (Royal Bank of Canada) to sell them in their 30+ branches in Ottawa-Gatineau. In a few weeks, we were sold out and that helped impress the NHL in 1990 that Ottawa was a good hockey market.

This is how you leverage your time.

Why did RBC do that for us? Because of CSR and also because thousands of hockey fans flocked to their branches (many for the first time) to buy their Sens PRNs and show support for the fledgling team. More people in their stores, however, is good biz dev for RBC’s branches.

Later, when we had to sell 1,000 signs in the Palladium (now Canadian Tire Centre), we sold them in pairs and for a minimum of two years so one thousand sales per annum became just 250 per year. More time leveraging.

If I am doing an event and I have to sell 100 tickets, I can usually recruit 25 people to sell four tickets each. Incentives might include a free ticket for them to attend or nothing at all. They’ll just do it because they like and trust me.

I can often create up to a 7:1 leveraging for my time—that is for every hour I put in, I can get 7 additional hours committed by others.

This allows me (and other entrepreneurs) to “do for a dollar what any other fool could do for two.”

Previous Post Town races to be everything it can be Next Post If you wants the money, you gots to be funny