How old are the Ottawa Senators? 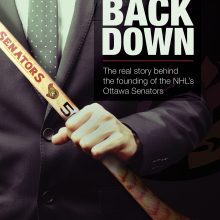 How old are the modern Ottawa Senators? To answer this question, I just ask my daughter Jessica (the youngest of our five kids) how old she is. Why? Because my spouse, Dawn Macmillan, was 9-months pregnant with our baby who was due the day after I had to leave to arrive on time for the NHL’s winter meetings taking place at that moment. Cyril Leeder and the rest of our group of 120 (including the Ottawa Fire Department marching band) were already in place in Palm Beach Florida. But I had to be there to present Ottawa’s case to the NHL’s Board of Governors for an expansion franchise. But I was torn. I’d been at every one of the births of our children. Was this going to be one I missed?

Here’s an excerpt from a book I wrote (Don’t Back Down, the real story of the foundling of the NHL’s Ottawa Senators and why big leagues matter) to celebrate the 25th anniversary of the Sens about this very conundrum–family or the NHL, which comes first?

Chapter 1, Don’t Back Down

“Dawn, you have to have our baby tonight,” I told my wife as I returned home to Kanata, a western suburb of Ottawa, on the evening of the 2nd of December 1990; she was nine months pregnant with my fifth child, which turned out to be Jessica Hillary Macmillan Firestone.

You can only imagine the grunt, acknowledging what a stupid comment/suggestion this was, but I had been present at the birth of all my other children, and wanted to be there for this one too. Still, I had to be in Palm Beach the following day, December 3rd 1990. Now why was that?

Because we already had 120 people from Ottawa in that Florida community, plastering bars, hotel lobbies, restaurants, elevators, even the back of front seats in local taxis with BRING BACK THE SENATORS bumper stickers. We even convinced the mayor of Ottawa at that time—Jim Durrell—to loan us the Ottawa Fire Department marching band.

Canucks had invaded the US, determined to wrest from the rapacious hands of the NHL’s Board of Governors (BOG) one of possibly two expansion franchises to be awarded that year at the National Hockey Leagues’ winter meetings, under its pretentiously named Plan of Sixth Expansion.

“Sure, you bet,” I answered, rolling over to go back to sleep.  It was 3 am, and I had been working 10 to 15 hour days, 7 days a week with my group since 1987 on this quixotic quest to return the National League to my hometown, after a nearly 60-year hiatus.

The Ottawa Senators won 9 Stanley Cups[1] during its run from inception in the late 19th century til 1933/34, its last year playing in Ottawa in the National League. By that time, the Great Depression had a strong hold over Canada and the US and much of the developed world, and the Sens were struggling. They subsequently moved to St Louis where they played for a year as the Eagles before finally folding at the end of the 1934/35 season.

It annoys me to hear Montreal, Detroit, New York (Rangers), Toronto, Boston and Chicago referred to as the “original six” because it isn’t accurate. The National League was founded in 1917 with these member clubs—

I added the Millionaires because they played TO in the Stanley Cup finals (a challenge series in those days) at the end of 1917/18 season. Toronto won that best of 5, 3 games to 2.

And the Sens won the Cup that season beating the Bruins 2-0-2. It was to be their last Stanley Cup victory until…?

[1] There is some argument about whether the team won 9 Cups or 11, but I’ll leave that to historians to argue about and make a final determination.

Anyway, if there is any “original” group of NHL teams, it ought to include the Senators, IMHO.

“Bruce, wake up, wake up! I’M DEFINITELY HAVING THE BABY.”

Finally I got up and took Dawn to the Civic Hospital. Her mother Cora MacMillan and our nanny looked after our other children and by 10 am, we had another healthy baby girl, a redhead to go with our blonde daughter, Rachel, and our brunette, Miriam. The two boys are Andrew and Matthew.

Along with the arrival of Jessica, Ottawa and the eastern seaboard of the United States were in the grip of an intense ice storm that day. All airports were closed. It was December 3rd and all expansion bidders—Hamilton, Ottawa, Tampa Bay, St Petersburg, Milwaukee, Houston, Seattle and Portland were due to present their city’s plans to the NHL’s Board of Governors (BOG) on December 4th, which also happens to be my birthday. How auspicious.

But it wouldn’t do for the lead proponent of Ottawa’s bid to miss that presentation.

“Greg, can you get a car and driver?”

“We’re leaving in a couple of hours—we’re going to drive to Florida.”

Greg Graham although still in his 20s at the time was a senior staff member, and one of the few left in Ottawa to manage the business while most of our group was already in FLA trying to land a franchise. Originally from Brockville, he’d moved to High Level Alberta to manage a bank in that town. It’s a place so far north and so cold that they leave their vehicles running all day in the parking lot at work so they can drive home at night. It goes down to -40 degrees[1] and stays there for weeks.

When Greg had a chance to return east and work for Terrace Investments Limited (original parent company of the modern era Senators), he jumped at it. Now he would have a chance after all to join the party forming in Palm Beach, because of an ice storm.

An e-copy of the book is available from, https://brucemfirestone.com/product/dont-back-down/ and the paperback from Amazon, https://www.amazon.ca/Dont-Back-Down-Founding-Senators/dp/1519743351.

• MAKING IMPOSSIBLE POSSIBLE
• FREEDOM VIA REAL ESTATE INVESTMENT AND PB4L, PERSONAL BUSINESS FOR LIFE
• FEHAJ, FOR EVERY HOME A JOB, FEJAH, FOR EVERY JOB A HOME
• MAKE YOUR HOME WORK FOR YOU, INSTEAD OF YOU WORKING FOR IT
• HIGHER ROI NOT JUST FOR OWNERS AND INVESTORS, BUT FOR TENANTS, GUESTS, VISITORS, NEIGHBORHOODS, COMMUNITIES, TOWNS, VILLAGES, CITIES AND THE ENVIRONMENT TOO

Previous Post Met an attorney this week who can only be described this way, sorry to say: A know-it-all-know-nothing Next Post FOR KIDS AND PEOPLE EVERYWHERE JUST TRYING TO DO THE RIGHT THING