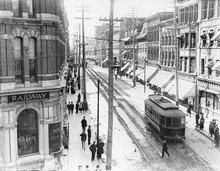 The end of an era happens this November 2019–Canadian Imperial Bank of Commerce’s main branch is closing on Sparks street after many, many decades. For its last years, it has been their “main branch” in name only.

When I arrived in Ottawa from Australia and started out in business (circa 1983), the manager of this branch was a fine gentleman, Ron McGill by name. I met with Mr McGill and, an hour and half later, walked out of there with a $3.5 million line of credit, age 32. I guess Ron liked my biz plan.

That was really the start of Terrace Investments Limited (the original parent company of the NHL’s Ottawa Senators). Thanks Ron!

My dad, OJ Firestone, first took me into that branch when I was a tiny boy, age 5, to open my first bank account, which, if you are counting, was the year 1956. I closed that account this week. #Sad

When I asked the skeleton staff (the few left to man-the-ship until it sinks in November) what the future of this classic art deco building is, they answered, “We think it is going back to the Algonquin people.”

Well, since I am an urbanist, I couldn’t help thinking of how this property could be re-imagined by them. This is what I came up with:

-imagine the great banking hall repurposed as a meeting place

-imagine grandstand seating in the round, seating hundreds

-imagine being able to obtain Algonquin art and learning

-imagine if the Algonquin would also allow others to use it for their meetups in the round!

Here’s to a great future ahead for this landmark.

Whatever you do, Algonquin, don’t give it back to the government… ever. Bureaucrats have already ruined enough heritage around the planet without trusting them with this priceless space.

• MAKING IMPOSSIBLE POSSIBLE
• FREEDOM VIA REAL ESTATE INVESTMENT AND PB4L, PERSONAL BUSINESS FOR LIFE
• FEHAJ, FOR EVERY HOME A JOB
• MAKE YOUR HOME WORK FOR YOU, INSTEAD OF YOU WORKING FOR IT
• HIGHER ROI NOT JUST FOR OWNERS AND INVESTORS, BUT FOR TENANTS, GUESTS, VISITORS, NEIGHBORHOODS, COMMUNITIES, TOWNS, VILLAGES, CITIES AND THE ENVIRONMENT TOO

postscript: I have had a lifelong fascination with the cultures of North American first peoples ever since I read American Holling C Holling’s 1941 tale, Paddle to the Sea.

It was this book that made me an inveterate whittler, wanting to copy of a first nation’s boy living above mid-continent Lake Nipigon who carved a marvelous tiny character sitting in a canoe and set him free to travel the great lakes to the ocean, far to the east.

The book (and later the National Film Board 1966 Oscar-nominated film of the same name) helped me fathom the vast expanse that currently makes up the nation called Canada.

If you haven’t read it to your kids yet, well, get on it!

I have done many hundreds of interviews on radio, TV and in other media, but the very first one I did was with a group of other children–our grade 1 teacher (Mrs Armstrong) took us to CBC (Canadian Broadcasting Corporation) radio studios to enthusiastically discuss the book for a rapt audience made of our parents only I am sure.

As willing and cooperative little boys and girls, we were mystified by what Mrs Armstrong meant by her choice of word, namely “enthusiastically.” What in tarnation did that mean for a radio show?

So, when she asked a question, I not only put up my hand, I grunted vigorously… to compel listeners to pay attention! Pretty soon, everyone else was grunting in what became a live, indistinguishable, mess.

Anyway, here’s the NFB film, Paddle to the Sea for your viewing pleasure–